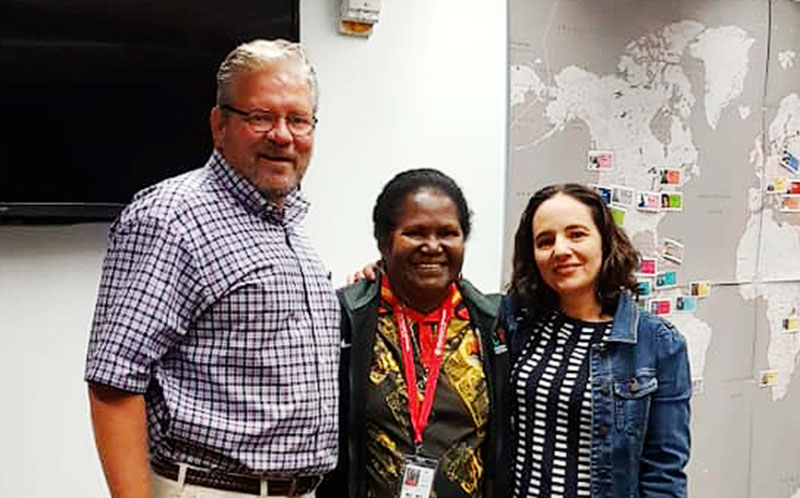 Lae resident, Aaron who was part of the team to the Pacific Games in Samoa this year, left PNG on September 14th for the US where she will be for a month.

She will spend three weeks in Colorado Springs at the Olympic Training Centre of the US Olympic Committee (USOC) followed by a weeklong coaching apprenticeship in Philadelphia before returning to Papua New Guinea.

Aaron said she is appreciative of PNGOC's support to build up her coaching capacity.

“I'm grateful for the recognition by PNGOC for my elevation as a national coach to participate in this international coaching education program.

“It's a privilege to have my sport - basketball, for the guidance and counselling to be a recipient of the scholarship by USOC,” she said.

Working as the Deputy Principal at the Lae Secondary School, Aaron has been heavily involved in the sports of netball and basketball in Lae city.

“I will make every effort to learn as much as I can from participating coaches around the world and from the course facilitators,” Aaron said.

She was recently trained as a Master Educator under the Oceania Sports Education Programme (OSEP) and was involved in the OSEP Development Coach course.

Aaron was identified and recommended through the Coaches Workshops run by PNGOC in the lead up to the 2019 Pacific Games.

“The experience is invaluable. I also believe in promoting the Olympic Spirit hence appreciation also to Olympic Solidarity for the support,” she said.

This is the 11th edition of the ICECP and will be held at the US Olympic Training in Colorado Springs. The program is funded by the IOC and provides coaches with intensive education that consists of lectures, projects, guest speakers, participant presentations, group work, field trips and project planning.

Participants in ICECP are all national-level coaches in their home countries with the Class of 2019 comprising of 32 coaches from 26 nations, 5 continents representing 18 sports.

Following her participation in USA, Aaron will be required to work on a project for her respective sport in PNG.

Aaron is the second participant from PNG with Chris Amini graduating with honours from the program early this year with his project on Team PNG Elite Performance Education Program aimed at elite coaches.

Aaron’s project will be focusing on Basketball Coach education for community coaches in Lae and will work with her assigned tutor for the next six months. After the four weeks in USA, she will return to PNG and will work on her project in collaboration with PNGOC and the Basketball Federation of PNG.

At the end of April, 2020, Martha will travel to Lausanne, Switzerland to present her completed project at the headquarters of the IOC.