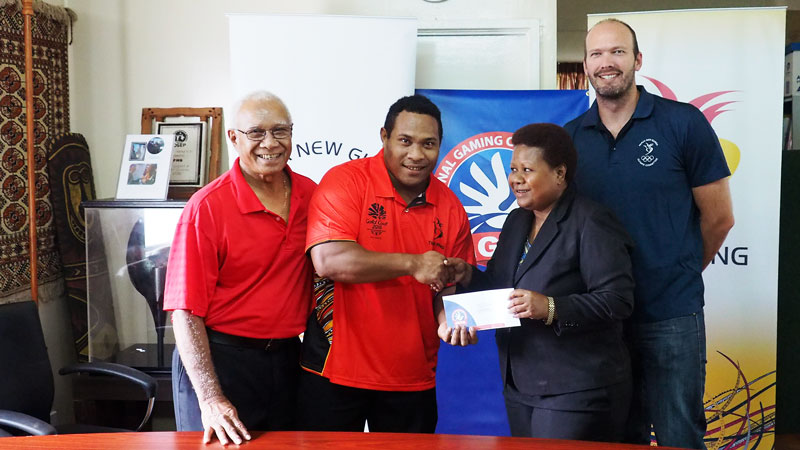 THANK YOU: Steven Kari receives the cheque from NGCB CEO, Imelda Agon at the presentation this morning. PHOTO: A. Molen/ PNG Olympic Committee.

The Gold Coast 2018 Commonwealth Games held in April was the most successful for Team PNG with three medals won and the government is rewarding the winners with incentives that it promised.

The Papua New Guinea Government through the National Gaming & Control Board presented the incentives to athletes today in Port Moresby. Chief Executive Officer of NGCB, Imelda Agon presented cheques for each of the medallists to the Papua New Guinea Olympic Committee who received it on their behalf.

Agon said the government recognizes the efforts and talents of its people in promoting a positive and bright image of PNG. She encouraged more people to be involved in activities such as sport for their own wellbeing and to contribute to the development of the country.

“We understand that a lot of sacrifice is done behind the scenes and we are very proud of your success at the Games,” she said.

President of the PNG Olympic Committee, Sir John Dawanincura thanked the government for the support saying that such incentives boosts the morale of athletes and also helps them to continue to pursue other goals in life.

“A lot of our athletes don’t have a job or a regular income but they spend a lot of their time and resources striving to achieve their dreams and we are proud of their successes.

“Winning a medal at the Commonwealth Games is a big achievement and we are extremely grateful for the recognition and support from the government,” Sir John said.

Prior to the Commonwealth Games which was held from April 4th to 15th, Vice Minister for Sports, Wesley Raminai, on behalf of the Prime Minister, Peter O’Neill, announced at Team PNG’s farewell gathering that medallists at this Games would receive incentives from the government.

Team PNG’s success at the Gold Coast Games was dominated by the sport of weightlifting which saw Steven Kari defend his title from the previous Games in the men’s 94kg division. He lifted a total of 370kg to get the gold. Kari also set a Commonwealth Games record in the Clean & Jerk section of the lift with 216kg.

His team mates, Dika Toua scored a silver in the women’s 53kg division while Morea Baru also got a silver in the men’s 62kg. Toua lifted a total of 182kg and Baru cleared 286kg.

Toua’s position may change yet change subject to the outcome of the doping case of the Indian lifter who got the gold.