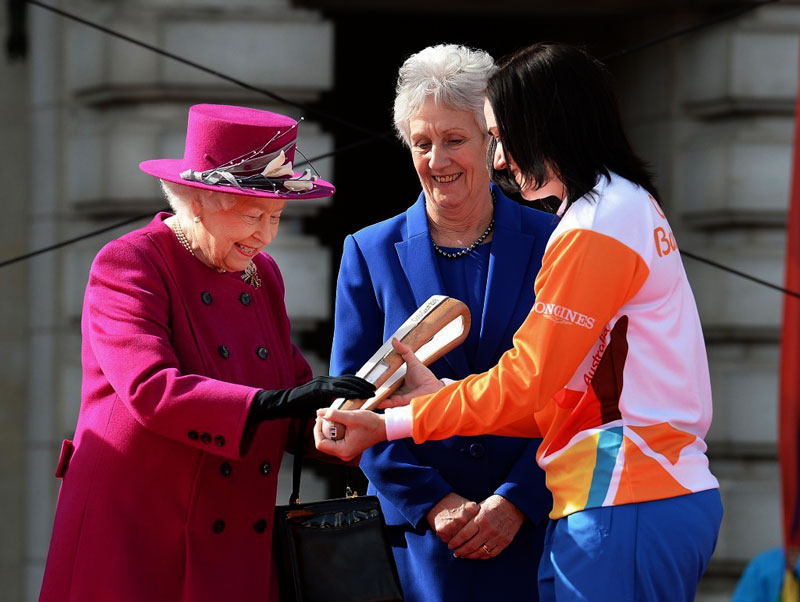 ROYAL MESSAGE: Her Majesty Queen Elizabeth II passes th baton with her message to the first runner in the Queen's Baton Relay in March, 2017. It will arrive in a few days in PNG. PHOTO: Sourced.

In just 5-days on December 1st, the Gold Coast 2018 Commonwealth Games (GC2018) Queen’s Baton Relay will arrive from Tuvalu to Papua New Guinea, the 65th of its 71 Commonwealth destinations. PNG will play an important role in the Relay when it welcomes the Baton, providing the opportunity to Share the Dream of the GC2018.

The Relay began at Buckingham Palace on 13 March 2017, with Her Majesty The Queen sending the Baton on its journey around the Commonwealth.

“Hosting the Queen’s Baton Relay is not only an exciting event for PNG, the Relay is an opportunity to highlight and promote our country through international media interest,” Sir John exclaimed.

Secretary General of the PNGCGA, Auvita Rapilla said preparations are almost complete to celebrate the arrival of the GC2018 Queen’s Baton Relay.

“We look forward to seeing the Baton arrive on PNG shores and having it visit Kimbe for the closing ceremony of the PNG Games, allowing our athletes from across the country to be a part of this fantastic occasion.”

The Queen’s Baton will be in PNG from December 1st to 5th. After arriving in Port Moresby on December 1st, the Baton will transit straight through to Kimbe to prepare for the closing ceremony of the Kimbe PNG Games on the 2nd of December.

Prior to making its appearance at the closing ceremony, the Baton will pay a visit to iconic sights of Kimbe town including the New Britain Palm Oil Plantation. It will then make its way to Kimbe town where Batonbearers will take it through the streets of Kimbe town towards the Muthuvel Stadium.

The Baton will leave Kimbe to return to Port Moresby where it will be taking part in several events including a business breakfast, school sports events as well as an event hosted by the Australian High Commission.

The visit of the Baton to PNG will culminate with the Governor General hosting a sunset reception for the Queens Baton Relay on the evening of December 4th.

On an ambitious journey to connect with the modern and diverse Commonwealth of today, the GC2018 Queen’s Baton Relay will achieve two records: it will be the longest Relay ever, and the most accessible Relay to date.

Carrying the message from Her Majesty The Queen, the Baton will travel 288 days through Africa, the Americas, Caribbean, Europe, Asia and Oceania, before returning to Australia for a 100-day domestic sector.

The final Batonbearer will return the Baton to Her Majesty The Queen (or Her Representative) at the Games Opening Ceremony on 4 April, 2018. The message will be removed from the Baton and read aloud to officially open the GC2018.