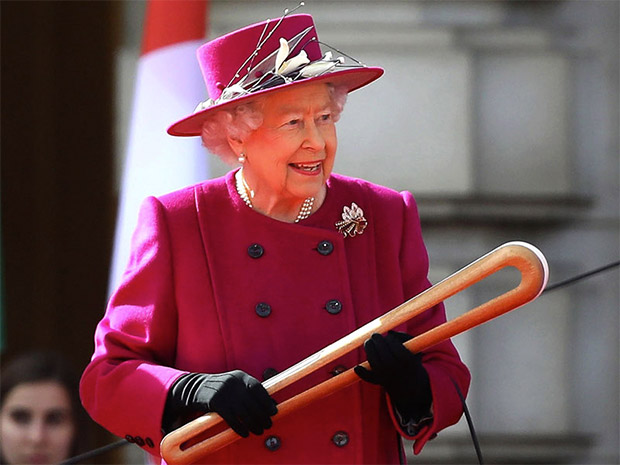 ROYAL MESSAGE: Queen Elizabeth II with the Baton at the launch of the relay. PHOTO: Sourced.

Team PNG celebrated with the rest of the Commonwealth as the Gold Coast 2018 Commonwealth Games (GC2018) Queens Baton was launched from Buckingham Palace, yesterday on Commonwealth Day by Her Majesty Queen Elizabeth II.

Accompanied by the Duke of Edinburgh and Prince Edward The Earl of Wessex, The Queen placed her message to the Commonwealth and its athletes inside the distinctive Baton.

The Queen’s Baton will now travel through the entire Commonwealth for 388 days, covering 230,000 kilometres to its final destination, the Opening Ceremony of the Gold Coast 2018 Commonwealth Games on 4 April 2018.

PNGOC President, Sir John Dawanincura, said the Queen’s Baton Relay (QBR) is an important part of the celebration of the Commonwealth Games and reinforces the strong bond that exists between commonwealth nations throughout the world.

“The QBR will be coming to PNG towards the end of the year, from December 1 to 5, 2017 and plans have already begun as to how we will make this visit of the Queen’s Baton to PNG shores a most memorable experience for the team and for Papua New Guinea while showcasing our unique country to the rest of the world.” Sir John said.

On hand at the launching of the baton were a host of Australian dignitaries and sporting icons, including GC2018 Games Ambassador and Australian Paralympic champion Kurt Fearnley, who expressed his emotions on the event.

“It’s been an amazing experience to be involved with both the unveiling of the Baton’s design in Australia and now its global launch in London. I’m proud to be a part of a Relay that has been designed for the people and where there are no barriers to being a Batonbearer.

The theme for the 2017 Commonwealth Day was ‘A Peace-building Commonwealth’ and the Commonwealth Games Federation President Louise Martin emphasized the link between sport and fostering peace.

“We passionately believe that friendly rivalry on the level playing field of sport can be a tool for building strong and peaceful communities and this has never been more relevant, as the Relay launch heralds the start of the Commonwealth family’s themed year of a peace-building Commonwealth.

“Her Majesty's message to the Commonwealth and its athletes, carried safely inside the Baton, will be in great hands with many thousands of community batonbearers. I look forward to following its remarkable journey and hearing the stories of all the athletes, communities and citizens involved.”

Sir John said, next year’s Commonwealth Games on the Gold Coast will be extremely special for Team PNG given the proximity of the host city to our country and he is excited about Team PNG improving on their record breaking Commonwealth Games performance at the most recent Games in Glasgow 2014 which saw Team PNG have its best ever performance with two gold medals coming from weightlifting.