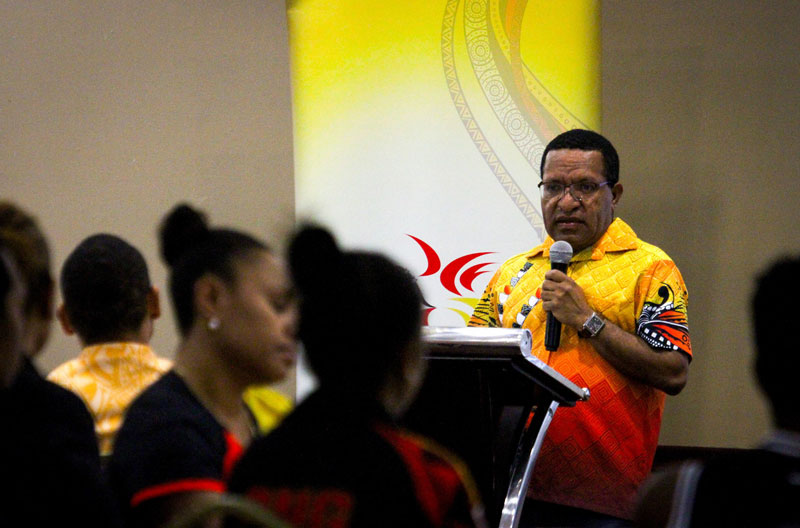 GOVERNMENT SUPPORT: Vice Minister Raminai encouraged sports to be honest in their exchange of information and ideas. PHOTO: A. Molen/ PNG Olympic Committee.

Effective communication among stakeholders and better utilization of existing services and facilities are two main areas identified that can boost Team PNG’s Games success in the future.

Team PNG’s vision for the 2019 Pacific Games was to make history on foreign soil – this was achieved by winning 131 medals, the largest medal haul at an overseas Pacific Games, and in the process managing to nudge hosts, Samoa to third place and claim the second spot on the medal table behind New Caledonia.

However, Team PNG’s ultimate goal of finishing first abroad remains as it evaluate it’s recent performance and begin their preparations for 2023 when the Pacific Games goes to the Solomon Islands.

Vice Minister for Sport, Wesley Raminai said effective communication is an important aspect that can contribute to this success. He said this begins with athletes, officials and stakeholders being honest with each other and finding solutions to improve their individual situations.

Raminai said Team PNG finishing second on the medal tally in Samoa this year is a great achievement but the country can still be the best with the right preparation.

“I was proud of Team PNG’s performance in Samoa but there is always a need to improve and evaluation is key to improvement.

“Part of Prime Minister Marape’s call to Take Back PNG is for everyone to reflect on how we can do better in everything we do and I want to challenge us all to ‘Take Back the Pacific Games’,” he said.

With the next Pacific Games four years away, Vice Minister Raminai said the evaluation workshop is the first step for Team PNG to take back the Pacific Games.

He also highlighted that the new national sports policy which is currently being finalized will provide the guidance needed to continue to see sport in PNG excel.

The use of existing facilities and services is another major area that should be utilized by sports during their preparations.

A report from the National Sports Institute (NSI) during the workshop showed that athletes and teams that used their facilities in Goroka had a higher success rate, with Athletics PNG used as a case in point, with their athletes who were based at NSI in the lead up to the Pacific Games winning more medals than any other sport for Team PNG in Samoa.

High Performance Sport PNG also shared a similar view but stressed the need for sports to begin their high performance programme more than two years before the Games.

During that time they could also be using their own sports events as lead up to the Pacific Games.

NSI representative, Samu Sasama encouraged PNG teams to consider using these facilities before going overseas because they have the same world class standard and are more affordable and easily accessed. 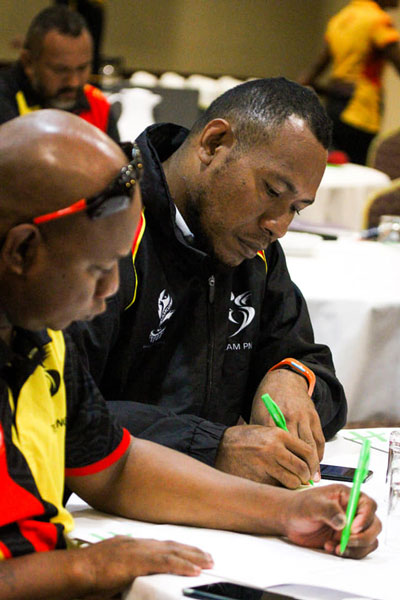 PREPARE IN ADVANCE: Sports were encouraged to begin their preparations more than two years before the Games. PHOTO: A. Molen/ PNG Olympic Committee.

PNGOC performance Coordinator, Chris Amini shared an analysis of Team PNG’s performance at the Games that noted which sports had achieved their own performance goals. Representatives from the sports were asked to reflect and self-evaluate what was done and how things could have been done better.

It was also pointed out that 67% of the gold medals won by Team PNG at the 2019 Pacific Games were won by female athletes with Toea Wisil the most successful individual athlete. She won four gold medals and a silver. Touch rugby was the only sport to have 100% return rate by winning all the gold medals on offer for their sport.

President of PNGOC, Sir John Dawanincura said athletes are number one when it comes to sport and that is why it is important to have good communication between them, their officials and sporting administrators.

Good communication and better use of resources are essential in the preparation of teams for every international event.

He said National Federations are the drivers of sport in PNG who put in the time and effort to make their sport and athletes the heart of Team PNG.

“I know the circumstances with preparing for this Games were difficult and so created an added burden to your roles as sports administrators, coaches and athletes. But these are the realities we face and by working together we can overcome them,” he said. 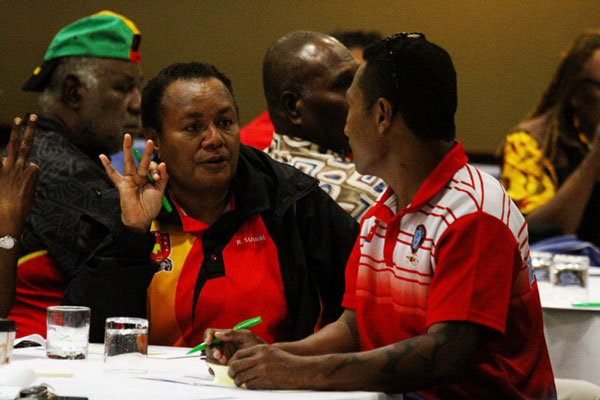 “I believe we did do PNG proud.  We had our best ever overall medal result at an overseas Pacific Games and finished second on the medal table. But there is always room for improvement. There is always a need for self-reflection and evaluation. There are always things that we can do better.

For the PNGOC, the evaluation workshop was a new direction in communicating important aspects of reviewing Team PNG’s performance with all stakeholders.

PNGOC’s practice has been to hold a Games evaluation workshop after the Pacific Games to share important information with the sports. Traditionally participation at the evaluation workshops has been at the National Federation President and Executive level.

“This time we have expanded the participation to include the officials and athletes. This is because everybody plays an important role in the performance of their sport and each of them bring an important perspective to the table,” said Secretary General of the PNGOC, Auvita Rapilla.

Team PNG’s 39 gold, 57 silver and 35 bronze medals in Samoa is its highest achievement abroad so far and provides enough room for improvement as it turns its focus to 2023 with a Team PNG planning workshop scheduled for February 2020.