I have been asked by the media, “How long have I known Grand Chief?” My simple answer is, Sir Michael is such a Legend, that those of my age will recall as far back as 1973 when we transitioned from a colonial territory into self government, it was a process in which he fiercely led us to our Independence in 1975.

At that time everyone certainly knew who Michael Thomas Somare was, his aura was so great that to this day we all feel that we have known him our entire lives.

Throughout the late 70’s I had been in his company at official functions and met him enjoying one of his favorite pastimes out on the golf course.

I recall in 1985 at the Mini South Pacific Games in Rarotonga, Cook Island at the Athletics Stadium when Takale Tuna won four (4) Gold Medals on the track, Sir Michael was in town for the Pacific Island Forum.

During Takale’s first Gold medal presentation, when our Anthem was played and the flag was being raised; I noticed that Sir Michael had tears of joy streaming down his face; and all I said at that moment was: "Chief, nau you pilim!" That was in reference to how we all feel when our Anthem is played and our Flag is raised.

Since independence in 1975, Team PNG has proudly represented Papua New Guinea and flown our flag at all the games we have attended. Sir John proudly displayed the PNG flag, which was used by the Papua New Guinean contingent to the 1979 South Pacific Games in Fiji soon after our independence. 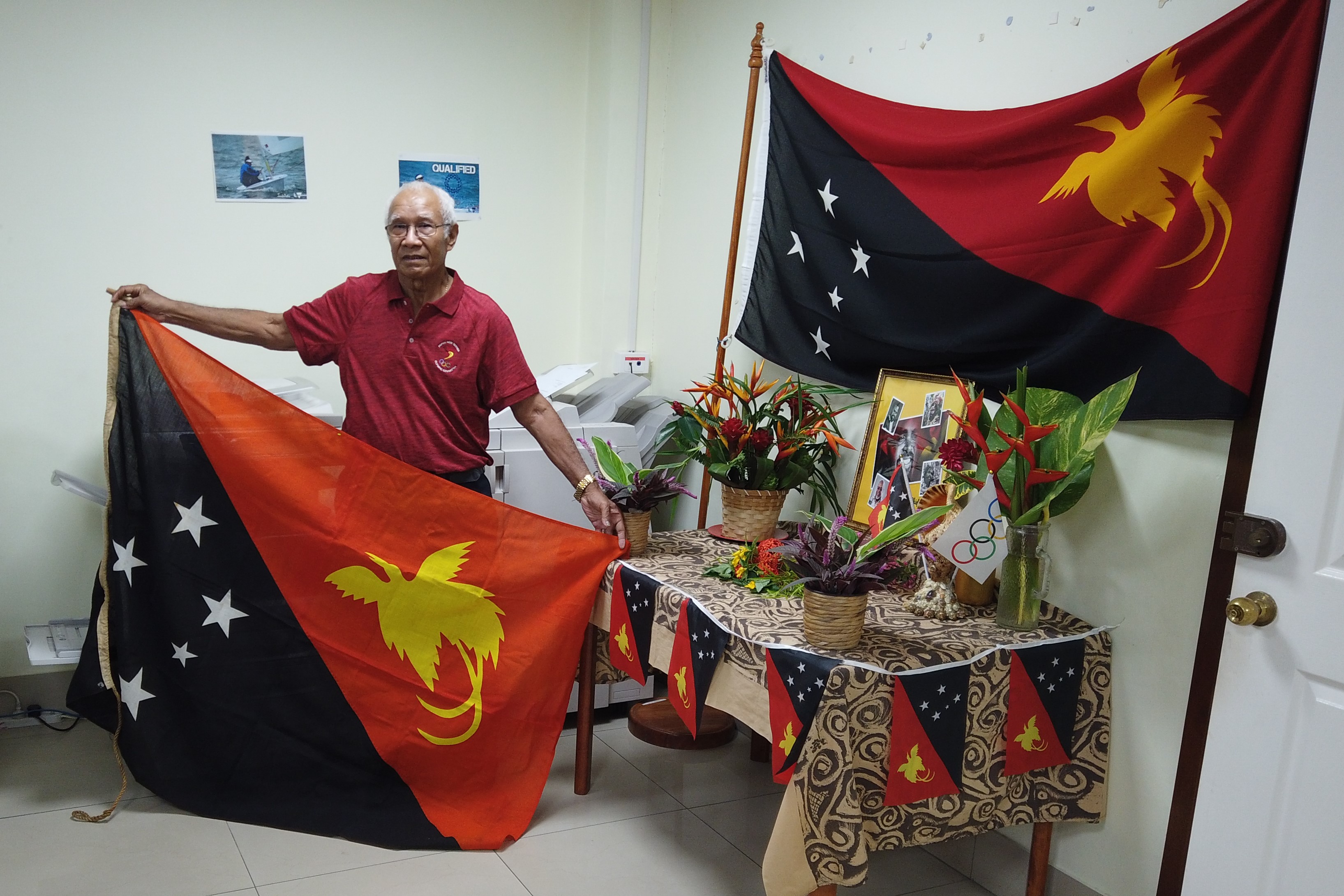 Photo: Sir John Dawanincurra standing next to the Sir Michael Somare shrine at the PNGOC Office and displaying the 1979 PNG flag which was given to the PNGOC by the family of Ross Maclean

This flag was given to us (PNGOC) from the family of Ross MacLean who was the Swimming Team Manager at the Games.

At the 2006 Commonwealth Games in Melbourne, in greeting Sir Michael and Lady Veronica on arrival at the airport, I strongly recommended that he agree for PNG Commonwealth Games Association (now known as the Papua New Guinea Olympic Committee) to be responsible for all of their Protocol requirements.

Because this was an international sporting event, we were better placed to facilitate all their necessary sports protocols, including accreditation requirements, a lot better than government processes to which he agreed.

We also facilitated Sir Michael and Lady Veronica's visit to the Games Village and the Cafeteria, a major hub for athletes and officials from all participating nations.

Sprinter Mai Koime will confirm that in speaking to Lady Veronica during lunch and being asked, "Husait lukautim yupela?"; I explained generally that the PNG Olympic Committee looks after travel, accommodation and uniforms with a small hardship allowance, and individuals and their national federations support their athletes and officials.

I did however qualify that most of our athletes were either students, unemployed, or of the lowincome bracket. I was advised later by Mai, that Lady Veronica sent her $200. Unfortunately, Sir Michael and Lady Veronica returned home prior to Ryan Pini's 100m Butterfly event, and after Ryan won, Sir Michael rang me from his Parliament office (amidst all the cheering) to congratulate Ryan personally, and I informed him that Ryan was in the warm down pool.

However, I hastened to advise Sir Michael that the Australian Prime Minister, was walking towards me and I asked John Howard to talk to him, which he did, and I could hear Sir Michael tell John Howard in no uncertain terms, that we got them with Ryan’s gold medal.

One of my treasured moments was a time when I arrived at the Members VIP dinning room at Parliament House just as Sir Michael walked out. He greeted me with some cheeky Motuan slang; and I returned the compliment in the presence of his staff, and they looked at me in shock, so I said, ‘He started it!’, as Sir Michael continued on with a wave and ‘Bamahuta’, and they noticed that he was still laughing.

That was a special moment.

On behalf of the Board, Management and Staff of the Papua New Guinea Olympic Committee I extend our sympathies and condolences to Lady Veronica and the Somare family. As a nation we absorb the lessons Sir Michael has taught us. Sir Michael’s actions are forever etched into the fabric that is the Nation of Papua New Guinea, and may his passing speak to us in places where we may have forgotten what it means to be human and a true Papua New Guinean.