Whilst the great majority of PNG’s athletes across all sports had to scale down their training considerably this year due to the closure of training venues and cancellation of competitions, one athlete has been training harder than ever during the last four months.

When Rellie Kaputin resumed her training with coach, Phillip Newton in Kingscliff, NSW late in February her chances of making it to the Olympics in Tokyo looked bleak.

Sidelined with injury, East New Britain’s golden girl of Track and Field had endured a lonely and mentally challenging six months in Port Moresby as she worked to rehabilitate her injury under the guidance of Team PNG Physio, Matthew Natusch with assistance from Hendriella Vilosi of the PNG Sports Foundation’s High Performance Division. 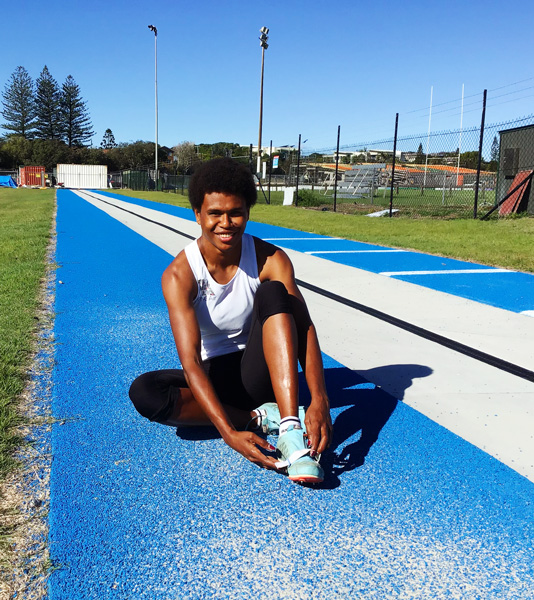 ON TRACK: Kaputin has worked hard to maintain her form as he targets the Tokyo 2020 Olympic Games in 2021. PHOTO: Courtesy Athletics PNG.

Few athletes would have had the mental fortitude to do the daily exercises and make the three times a week trip to the Taurama Aquatic Centre which was often a challenge in itself.

However, Kaputin was determined to pursue her Olympic dream and has seized with both hands the second chance that she has been given through the deferral of the Games to 2021.

The outlook is now very different for the PNG national record holder who is already back to full fitness and eagerly looking forward to the opportunity to compete again.

“Coach Newton reported last week that in testing conducted as part of Rellie’s training programme, she is already ahead of where she was in June 2019, just prior to her sensational performances at the Oceania Championships in Townsville,” he said.

Kaputin is reported to be totally focused on achieving her potential and qualifying for the Games next year.