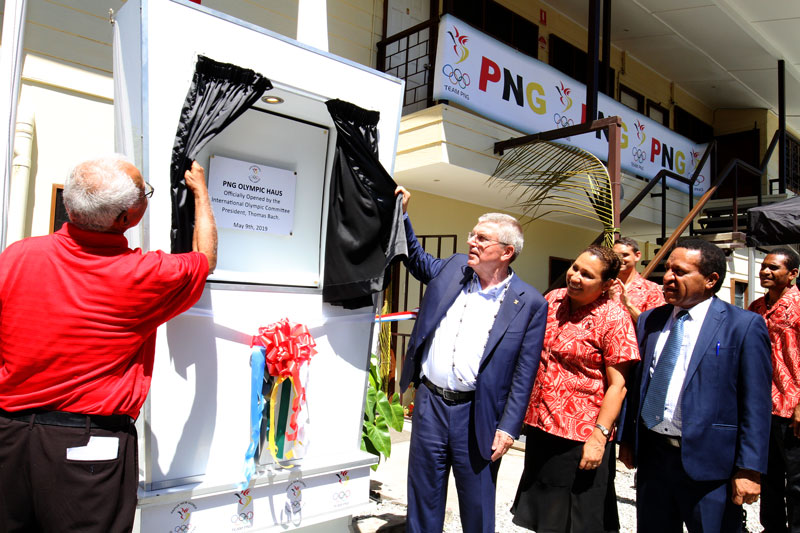 After 26 years the Papua New Guinea Olympic Committee dream of having its own home has finally come trues with the opening of its PNG Olympic Haus.

The new office is at Lahara Avenue in Boroko, National Capital District and was opened by the President of the International Olympic Committee (IOC), Thomas Bach today in a ceremony.

Bach congratulated the PNG Olympic Community on this milestone achievement and also presented them with the certificate of recognition as a National Olympic Committee.

He said the Olympic Haus can be the home of Olympics and Olympism in PNG.

President of the PNG Olympic Committee, Sir John said it was a long, hard and emotional journey and to finally have a permanent home for the organization is a big achievement and a milestone in their history.

He said the dream to have the PNG Olympic Haus was established in 1993 when Sir John was the Chairman of the Oceania National Olympic Committee (ONOC) Development Commission.

Back then they were based in the old Boroko Squash Club premises and have since moved to several other locations including the Sir John Guise Stadium, TISA Haus, and at the Telikom 4-mile compound.

They had even worked out of their own home and other temporary spaces. 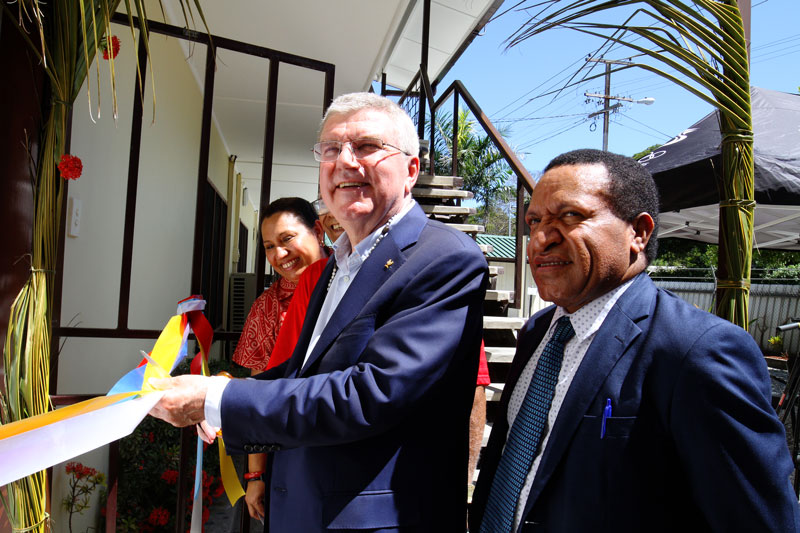 “Our achievement of this milestone moment for PNGOC is possible through the funding support generously provided by the International Olympic Committee and the ONOC and so I wish to thank IOC President, Thomas Bach and ONOC President, Dr. Robyn Mitchell,” said Sir John.

“We want the PNG Olympic Haus to be a home not just for our staff, but also for the Olympic Movement in PNG.

“We want this place to be used by sports administrators and athletes, by students and children, as a place of work and learning,” he said.

Secretary General of PNG Olympic Committee and IOC Member, Auvita Rapilla said when selecting the property, they were conscious that it was located in an easily accessible and central location, next to many of Port Moresby’s key sporting grounds.

“We feel that having our own office will allow us to serve our members more effectively and contribute to our work in all other areas,” said Rapilla.

The property itself provides enough office space for the organisation’s growing team, as well as space for a resource centre for National Federations and a training room and medical room.

Since moving into the property in March this year many Sports, Olympians and athletes have visited and utilized the office.

“Much work has been done on the property to get it ready for this occasion and there is still further work we would like to have done in line with the IOC’s commitment on sustainability and being climate change conscious,” said Rapilla.

She added that it was a special privilege and honour to have it opened by the head of the IOC and thank Bach for visiting and officiating at the event.

Bach was given a tour of the facility and also met with the staff of the PNG Olympic Committee.

Following the opening, Bach met with the PNG Prime Minister and Minister for Sport, Peter O’Neill and also witnessed the signing of the Memorandum of Understanding (MoU) between the PNG Olympic Committee and the PNG Sports Foundation.

Bach was also impressed with the sporting facilities and reception he received during his visit.

He said his high expectations of PNG as an Olympic country has risen further with what he has seen and been led to through his meetings and interactions during his stay.

“The people of PNG not only tolerate their diversity, they embrace that diversity, and in all this diversity they consider it to be an enrichment to their society, but they find unity in particular through sport.

“I see the diversity of the country is united by sport and how much sport contributes towards society here in PNG. We can also see the enthusiasm with determination of Team PNG and many of its athletes so you can be proud of being a real Olympic country,” said Bach.

“Keep going strong, and show your determination and love for sport and use it to make the world a better place,” he said.